The Magical Land of Books

I love reading since I was very little. I love most genres, from romance to non-fiction, fiction, poetry, romance, historical, children's book, cookbook, craft books, creative books, self-help, psychology, sociology. I am eclectic because I love to learn everyday something new.
489 BOOKS 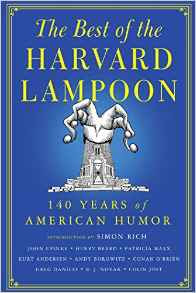 The first volume of the Harvard Lampoon was published in February 1876 written by seven undergraduates.

The idea? Re-create Punch, a British magazine all dedicated to humor.
Twelve hundreds copies all sold out.

Since there what characterizes the Harvard Lampoon is satire and great humor.

The Golden period from 1926 to 1945. In that case students were influenced by the The New Yorker following more or less the same guidelines of the prestigious New Yorker's magazine.

With the decades the students considering also the weight that their reality was assuming decided to start a good tradition: the ones of the honorary members.

It was simple to include Winston Churchill. Billy Crystal and Robin Williams, Jay Leno, Kurt Vonnegut and David Foster Wallace
.
In this book the first one of the series: The Best of the Harvard Lampoon: 140 Years of American Humor published last Nov 15t an introduction at  the humor, characteristics, modus vivendi and thoughts of the Harvard students through the time and and thanks to the reality that they created long time ago with many sketches, little short stories, historical covers. My favorite short story remains the one of the finger. So funny!

With the time Hollywood interested at The Harvard Lampoon. The students became collaborators with the creators of the Saturday Night Live, The Simpsons, and other countless prestigious shows.

I fall in love for the funny introduction by Simon Rich, and the cover is absolutely wonderful!


Many thanks to NetGalley for this book.
Anna Maria Polidori
Harvard Lampoon the best of the harvard lampoon conan obrien
Source: http://alfemminile.blogspot.it
Tweet